Ember and Ash by Pamela Freeman 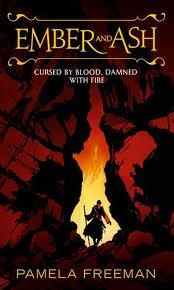 The old ones will have their revenge.

Two peoples have been fighting over the same land for a thousand years. Invaders crushed the original inhabitants, and ancient powers have reluctantly given way to newer magics. But Ember was to change all this with a wedding to bind these warring people together – until her future goes up in flames.

Ember’s husband-to-be is murdered by a vengeful elemental god, who sees peace as a breach of faith. Set on retribution, she enlists the help of Ash, son of a seer. Together they will pit themselves against elementals of fire and ice in a last attempt to end the conflicts that have scarred their past. They must look to the present, as old furies are waking to violence and are eager to reclaim their people.

This is a book I recently added to my TBR when I was close to finishing Full Circle, the end to the Castings trilogy which I thoroughly enjoyed. This seems to be like a standalone sequel to that series which is set some time after the end of Full Circle and according to other reviewers also features some characters from the original series. When I discovered the author had written more in this fabulous and beautifully realised world, I just knew this would have to be a priority read for me sometime soon in the following year as I truly have developed a love for the way this author writes and describes things. These books are not fast paced books as such, instead they immerse the reader in everything that is going on and the descriptions of the world and the surrounding nature are to me, simply splendid 😀 This is a feature that seemed to annoy a lot of other readers, but for me I really liked how the author wrote in side stories of a lot of the characters the main characters met on their journeys, these were so beautifully done and really engaging to read about and I don’t know whether the author will continue that format in this book, but I sure as hell will find out sometime soon! 🙂