The Girl King by Mimi Yu 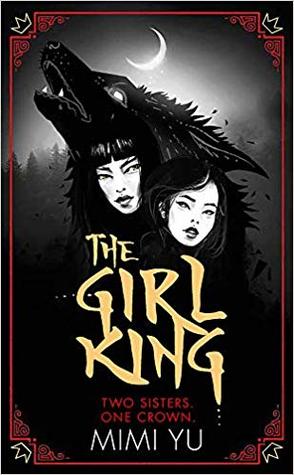 Two sisters become unwitting rivals in a war to claim the title of Emperor in this sweeping tale of ambition, sacrifice and betrayal for readers of Sabaa Tahir and Alwyn Hamilton.

All hail the Girl King.

Sisters Lu and Min have always understood their places as princesses of the Empire. Lu knows she is destined to become the dynasty’s first female ruler, while Min is resigned to a life in her shadow. Then their father declares their male cousin Set the heir instead—a betrayal that sends the sisters down two very different paths.

Determined to reclaim her birthright, Lu goes on the run. She needs an ally—and an army—if she is to succeed. Her quest leads her to Nokhai, the last surviving wolf shapeshifter. Nok wants to keep his identity secret, but finds himself forced into an uneasy alliance with the girl whose family killed everyone he ever loved…

Alone in the volatile court, Min’s hidden power awakens—a forbidden, deadly magic that could secure Set’s reign…or allow Min to claim the throne herself. But there can only be one Emperor, and the sisters’ greatest enemy could turn out to be each other.

I was so excited when I saw my library had finally got this book in cause that description and the promises of Asian influences completely won me over. On mentioning Asian references however, there are a lot of reviews saying the only thing Asian about this book and characters are their names while everything else could easily fit into general high fantasy. Believe it or not this makes me want to read this even more as I have an upcoming trip to Thailand next month and have been looking for some good inspired fantasies to take with me. Other things reviewers have said is that the story can be quite slow in parts and that there is not enough violence and danger as the plot and US cover suggest and hint at, a lot of the plot seems to be involved around plotting and travelling. These don’t deter me though as I have had my sights set on this book for the Japan trip I took in the summer of this year only the library didn’t get this book in in time for that trip so I will be taking it to Thailand instead. I hope there will be at least some Asian influences to the world and magic other than only the characters names and this plot on its own does sound like it is full of intrigue, but either way I am interested in this book and have been since it first came out so this will be a definite read in the coming months 🙂

One thought on “Goodreads Monday | The Girl King”