The Heralds of Valdemar omnibus by Mercedes Lackey 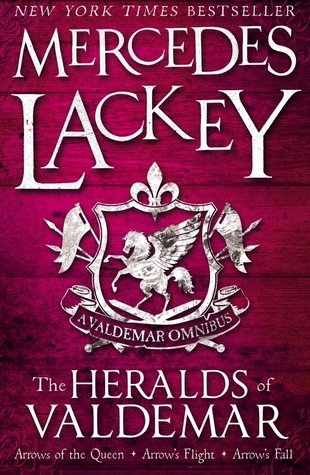 Talia, a young runaway, is made a trainee Herald after she rescues one of the legendary Companions of Valdemar. But as Talia struggles to master her unique abilities, she unearths a deadly plot by enemies capable of both diabolical magic and treacherous assassination, which could destroy both Queen and kingdom.

A gentle breeze rustled the leaves of the tree, but the young girl seated beneath it did not seem to notice. An adolescent of thirteen or thereabouts, she was, by her plain costume, a member of one of the solemn and straight-laced Hold families  that lived in this borderland of Valdemar- come there to settle a bare two generations ago.

“Heavens, what is it now?” Elearth muttered under his breath as the boy pounded up to them.

“I can see that, Levand. What’s happened this time? Fire, flood, or rioting in the streets?”

This is very common for me when I do these posts, but as like most of the time this is a book I have only started the previous night. From the start it seems like a captivating read and I can also see there are many other readers who speak highly of this authors Valdemar novels. In my library I have seen a lot of the Valdemar omnibuses around and I never knew which omnibus trilogy to start with as they all appear to be set in the same world but with different characters and plots I presume as I’ve not found any reading order list in the inside of this book… A recent search has told me these books are set over thousands of years and I don’t know where I got the idea that this one I’m reading now is the first one but it doesn’t appear to be by a long shot 😛 Can these trilogies be enjoyed out of order? I guess I’ll find out and I will also be carrying on with this book because I don’t feel ready to give it back to the library just yet and I have been anticipating reading it. I’m hoping to really enjoy this world and the characters as well as the magical aspects, these books seem to have quite high general ratings and many good reviews from critics including Stephen King so this really should be quite a ride 🙂