The Fall by Claire Merle 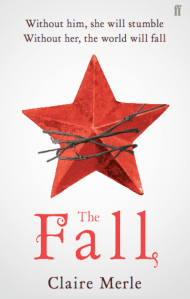 London, in the not-so-distant future. Society has been divided into Pures and Crazies according to the results of a DNA test. But seventeen-year-old Ana, whose father invented the Pure test, has uncovered a recording with dangerous evidence that the tests are fake.

Ana has escaped her father and made it to the Enlightenment Project – a secluded sect living on the outskirts of the City. Back in the arms of Cole nothing is simple. Some in the Project believe her presence jeopardises their safety, others interpret her coming as part of their prophetic Writings.

When the recording Ana stole goes viral, the Project comes under attack. Now Ana’s father isn’t the only one looking for her. She’s come to the attention of Evelyn Knight, the Chairman of the Board – a powerful woman with a sinister plan. Ana must take greater risks than ever to unravel the truth and discover the secrets that lie beneath the Pure test. But unlike her father, the Chairman doesn’t want her safely home. She wants Ana’s spirit crushed, permanently. And she will destroy everyone Ana cares about to do it.

Ana crouched in a thicket near the Project’s ten foot high wall. Her head swam in the heat and pain shot through her bent legs, but she didn’t move. Beyond the bracken a path cut through the woods. Far on the other side of the paved track, a figure bellied through the undergrowth.

Concealed in the shadows near the registration building. Dombrant spent several minutes watching the infrared activity on his contact lens. Ana could see the little computer chip shining in his eye, the lights in different parts of the circuit blinking, intensifying, fading.

When I think of the first book in this duology I just think a giant meh because I didn’t find much to like there from the cardboard characters to the world. This book is a minor improvement as there is more going on and more action but I must say at the end of the first book and this one the world makes hardly any sense and I can’t bring myself to care about the characters. There is a good suspenseful narrative to this one and I am close to finishing so overall I’d say this is better than the first one in some ways. I will say the plot and what happens with the characters still feels a bit far-fetched and unreal but I tend to find that more with YA dystopian books a lot these days which won’t stop me from reading them, just that I wish they felt more realistic and likely to happen, but maybe I’m just getting harder to impress as I get older 😛 Despite the things I didn’t like I am still glad I read this series and I don’t think I’ll ever be properly put off the dystopian genre, adult or YA, but this was still worth a read, just that I wouldn’t exactly call this series good but all opinions are my own 😉

One thought on “The Friday 56 & Friday Book Beginnings | The Fall”