MetaWars: Fight for the Future by Jeff Norton 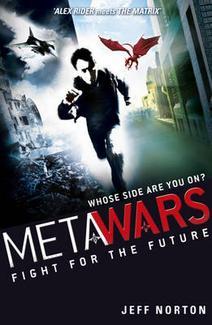 In an unforgiving future, two warring factions – the MILLENIALS and the GUARDIANS – are locked in a brutal battle over control of an online virtual world called the Metasphere. Jonah Delacroix has always known which side he’s on – the same side as his dead father. But when he assumed his father’s avatar, he learns that things aren’t as black and white as he once believed. He’s catapulted into a full-throttle race through both worlds – but can he find the truth?

MetaWars : Fight for the Future is the first installment in a fantastic futuristic adventure series with fast-paced, cinematic narrative. Set in the near future MetaWars suggest a fascinating – but also scary – prediction of what might be to come, covering already topical issues such as fuel shortage, climate change and economic meltdown.

I think this is another book I wish I’d have read sooner when it was available freely in my library, but no matter, my library still has some books of this series in stock and there are still some that are available online for my library to buy. I remember first coming across this book on the back of another book in like a suggestion area where the publisher advertises other similar books the reader might like and on reading up more about this series, I was soon wanting to read all these someday but as it seems other books were released and I got side tracked 😛 This description seems to hint at everything I’d like in a book these days from sci-fi, dystopia and an exciting cyberpunk-like adventure and I can guarantee I will get to read these books some day hopefully soon in the new year as I’m going o make it a goal to read older books that might be, or risk becoming, out of print. But this sounds oh so exciting so I will get time to read these and hopefully my libraries can be of good help 😉

One thought on “Goodreads Monday |MetaWars: Fight for the Future”