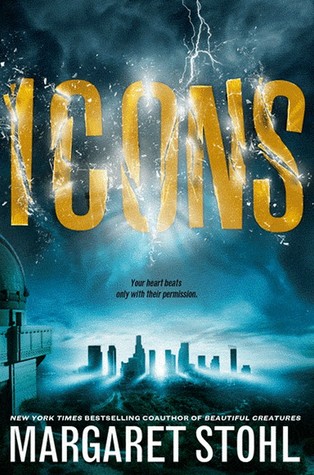 Your heart beats only with their permission.

Everything changed on The Day. The day the windows shattered. The day the power stopped. The day Dol’s family dropped dead. The day Earth lost a war it didn’t know it was fighting.

Since then, Dol has lived a simple life in the countryside — safe from the shadow of the Icon and its terrifying power. Hiding from the one truth she can’t avoid.

She’s different. She survived. Why?

When Dol and her best friend, Ro, are captured and taken to the Embassy, off the coast of the sprawling metropolis once known as the City of Angels, they find only more questions. While Ro and fellow hostage Tima rage against their captors, Dol finds herself drawn to Lucas, the Ambassador’s privileged son. But the four teens are more alike than they might think, and the timing of their meeting isn’t a coincidence. It’s a conspiracy.

Bestselling author Margaret Stohl delivers the first book in a heart-pounding series set in a haunting new world where four teens must piece together the mysteries of their pasts — in order to save the future.

I’ll put it out straight here, alien invasions are not usually my cup of tea, they were when I was younger but as I grew up they became kind of meh. I haven’t yet read anything by this author either but for some reason feel drawn to this book and its sequel (my library has the sequel but not this one) which I’m tempted to order from my library completely ignoring my current library TBR 😛 The general reviews for this book are not very high as many people said they preferred the Beautiful Creatures series even though I’ve seen those books get really negative reactions too 😛 Both series by this author are on my TBR and this one sounds like the type of book that would be layered and full of twists and action and even might offer something new to the dystopian genre. That’s me only looking at the positives though which I will do with every new book I start even though it looks like I’m really gullible (I probably am though but I prefer to look at positives).  Current TBR must come first I know, but I’ve gotten myself all excited to read this one now…