Many people would probably say I haven’t lived because I haven’t seen the movie the Nightmare Before Christmas, but I will always say I will forever pick books anytime before movies or TV programmes cause I’m that obsessed with them 😉 At our home we don’t really celebrate Christmas in the way others do, not because we’re a different religion or anything but because my dad has always liked to take us on trips abroad over the Christmas holidays and that has always been the best type of Christmas present. This is a tag I saw on Bookish Pisces and it was also created there so it is definitely worth a try! 🙂

Jack: A moody character looking for a purpose:

I know others might not agree, but I thought Chaol from the Throne of Glass series was quite broody and in some places was looking for his purpose. He was a character with a lot of potential that I will be reading more about in the new year, in fact I think a lot of characters from this series fit this description but so far Chaol has to be one of my favourites from this series.

Sally: A character that is broken but takes control of their destiny:

Saba from Blood Red Road, she had so many bad things happen to her throughout the book but all the time she proved that she was no one to be messed with and caused one of the most epic endings! I adored her as she was strong but not in a way that was unbelievable and I can’t believe in all this time I haven’t finished the series! 😛

Christmas Portal: A book that took you to a magical land: 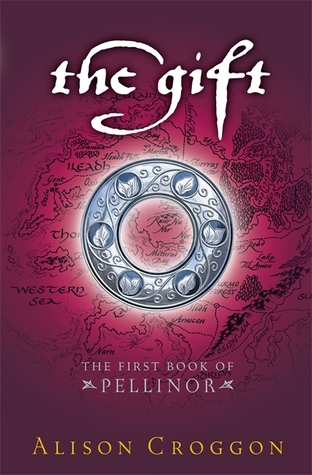 I’ve read three books set in this world and each time I am blown away by the splendour of the descriptions and world building. I also really like the characters who make things really interesting and I must say at the moment this is one of my all time favourite high fantasy worlds as it sure did fire up my imagination and filled me with wonder at the descriptive history. Highly recommended!

: A book with star-crossed lovers:

The first one that comes to mind here The Hunger Games which had a romance and plot that completely took me in, probably because it was one of the first awesome dystopian books I’d ever read. I really wish this author would write more books 😦

Zero: Your favourite pet companion in a book or series:

Even though I haven’t seen him for a while and am not sure we will see him again (my memory is hazy but I know he definitely didn’t die), I really liked Gratch the short-tailed gar (flying winged predator) from the first few books of the Sword of Truth series. His nature made him a viscous carnivore but he was never like that with the MC Richard or his friends as they had a special bond which was really nice to read about and it was also really nice to see he had a soft side and a soft spot for the man who saved him. They made brilliant companions and I really hope we will see him or his kind again one day in these books…

Feel free to take this tag! 🙂

2 thoughts on “The Nightmare Before Blogmas Tag”