Temple of the Winds by Terry Goodkind 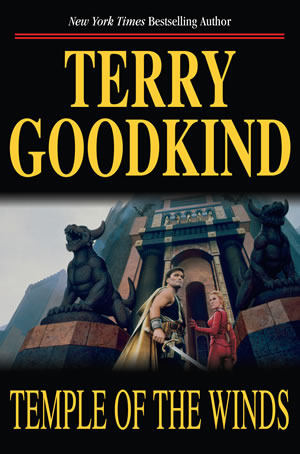 On the red moon will come the firestorm…

Wielding the Sword of Truth, Richard Rahl has battled death itself and come to the defense of the D’Haran people. But now the power-mad Emperor Jagang confronts Richard with a swift and inexorable foe: a mystical plague cutting a deadly swath across the land and slaying thousands of innocent victims.

To quench the inferno, he must seek remedy in the wind…

To fight it Richard and his beloved Kahlan Amnell will risk everything to uncover the source of the terrible plague-the magic sealed away for three millennia in the Temple of the Winds.

Lightning will find him on that path…

But when prophecy throws the shadow of betrayal across their mission and threatens to destroy them, Richard must accept the Truth and find a way to pay the price the winds demand…or he and his world will perish.

“Let me kill him,” Cara said, her boot strikes sounding like rawhide mallets hammering the polished marble floor. The supple leather boots Kahlan wore beneath her elegant, white Confessor’s dress whispered against the cold stone as she tried to keep pace without letting her legs break into a run.

He laughed. “Your beautiful green eyes said it for you. When you looked at my old woods outfit, your eyes spoke quite clearly.”

She took a step back and gestured to the new clothes. “Where did you get all this?”

He clasped one of her hands and with the fingers of his other lifted her chin to gaze into her eyes. “You’re so beautiful. You’re going to look magnificent in your blue wedding dress….”

I was recommended this series by one of my support workers in 2015 when I was in another college and even though it has taken me a while to read the books, I’ve loved this series since I was first introduced 🙂 These books seemed to have it all with action, good characters and world building plus a plot that always seems to twist and turn. Myself I can’t see why there are so many haters for this series and author because I can see he’s put a lot of effort and time into these books to make them real and enjoyable. I’ll also mention that because this is a long series and I don’t remember everything about the first three books I will be reviewing these books all together as a series because there’s no doubt there’s lots to say and add about these masterpieces, but with the really long series or the series where I don’t remember every detail from every book, I’ll review them as a series. But right now I’m hoping to get this book finished soon before my upcoming trip… it’s a long book but there’s excitement nearly all the way, definitely recommended! 🙂