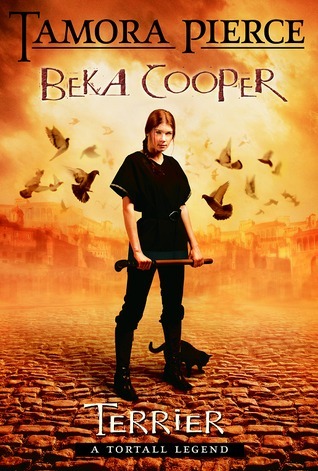 Hundreds of years before Alanna first drew her sword in Tamora Pierce’s memorable debut, Alanna: The First Adventure, Tortall had a heroine named Beka Cooper – a fierce young woman who fights crime in a world of magic. This is the beginning of her story, her legend, and her legacy….

Beka Cooper is a rookie with the law-enforcing Provost’s Guard, commonly known as “the Provost’s Dogs,” in Corus, the capital city of Tortall. To the surprise of both the veteran “Dogs” and her fellow “puppies,” Beka requests duty in the Lower City. The Lower City is a tough beat. But it’s also where Beka was born, and she’s comfortable there.

Beka gets her wish. She’s assigned to work with Mattes and Clary, famed veterans among the Provost’s Dogs. They’re tough, they’re capable, and they’re none too happy about the indignity of being saddled with a puppy for the first time in years. What they don’t know is that Beka has something unique to offer. Never much of a talker, Beka is a good listener. So good, in fact, that she hears things that Mattes and Clary never could – information that is passed in murmurs when flocks of pigeons gather … murmurs that are the words of the dead.

In this way, Beka learns of someone in the Lower City who has overturned the power structure of the underworld and is terrorizing its citizens into submission and silence. Beka’s magical listening talent is the only way for the Provost’s Dogs to find out the identity of this brutal new underlord, for the dead are beyond fear. And the ranks of the dead will be growing if the Dogs can’t stop a crime wave the likes of which has never been seen. Luckily for the people of the Lower City, the new puppy is a true terrier!

I still can’t believe I have to rate this one star. A Tamora Pierce book too! But I found this book so slow with a lot of unnecessary details and not enough necessary details. I mean a lot of this was just ramble about the MC’s everyday life and like who came to visit her and what they talked about etc…

So basically the whole of this book is about the everyday life and line of duty of “Puppy” Beka Cooper, and don’t get me wrong I actually liked her as she was very well-developed and strong yet flawed. I must say that’s one of the things I really like about Tamora Pierce’s heroines as they all are strong and believe in good but they’re not overly perfect that they stop feeling like real people. But so far that’s where the good ends in this series as I couldn’t really connect with the other characters and found the whole plot tediously slow and boring.

This book was supposed to be about the mystery of who was stealing the missing children and killing them and that sounds real exciting doesn’t it? Only it wasn’t at all, somehow the author managed to dull down what could have been an interesting mystery (and don’t get me wrong I love a good mystery) and instead focus on mundane things in Beka’s everyday life such as who come to visit her, what time and what they spoke about, I mean honestly who cares?? And not only that but I felt this book on a whole was rather light for a book that was about dealing with criminals. I’m not saying this because I prefer darker books but because it really would have added more excitement and atmosphere to the whole book and world if things had been more gruesome cause come on, she is patrolling the rougher parts of the city…

Another thing I will mention is despite this book’s size and length, there’s zero world building. I don’t know why this was the case as there were plenty of opportunities to put in some world history but still we practically got none. So on the whole I would say this book would need more action and just a more exciting faster pacing where you don’t know what’s around the corner and you’re always in suspense…

This just had so much potential to be thrilling and dark with plenty of twists and turns, heck even when we do find out who is killing all the children it isn’t that much of a shock just like eh okay then…. I had high hopes for this but was let down mostly by the slow pace and lack of suspense in the plot and writing. Despite all these negativities I still would like to find out what becomes of Beka AND others have said these books get better… I just don’t understand why so many on GR have rated this one so highly though…

I wouldn’t really like to recommend this, but if you really like slow fantasy stories with no world building and a plot that focuses on the characters everyday lives, then you’d devour this. Seriously.