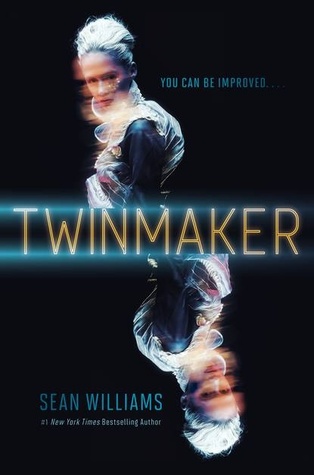 You can be Improved….

In a near-future world in which technology can transport you anywhere instantly, can a coded note enable you to change your body—to become taller, stronger, more beautiful? Clair is pretty sure the offer is too good to be true. But her best friend, Libby, is determined to give it a try, longing for a new, improved version of herself.

What starts as Libby’s dream turns into Clair’s nightmare when Libby falls foul of a deadly trap. With the help of Jesse, the school freak, and a mysterious—but powerful—stranger called Q, Clair’s attempt to protect Libby leads her to an unimagined world of conspiracies and cover-ups. Soon her own life is at risk, and Clair is chased across the world in a desperate race against time.

Action and danger fuel Sean Williams’ tale of technology, identity, and the lengths to which one girl will go to save her best friend.

If I could sum up Twinmaker in one word it would be: meh, but don’t get me wrong this book wasn’t boring just very implausible and poorly executed.

Sure, the good things were the author thought of some really good ideas and managed to craft some very fast paced scenes. But it was these and only these that kept me reading.

I started this book optimistic and looking forward to finding out more about the conspiracies of this world and its technology. There was a lot of potential here. Instead what I got was a bland as fuck main character (and all the others to be honest) and hardly any world building.

“High-stakes action combines with issues of friendship and body image in this timely and thought-provoking exploration of the intersection of technology and identity.”

I( can see from this description that this book was probably intended to be deep, but like I said before this was executed poorly. How? Well for starters the writing style had hardly anything unique or intriguing about it and the way the technologies and events were described there was nothing special, nothing to pack a punch so to say. The characters were also dull as dirt with hardly any spark behind their motives plus there were no shocks when the plot twisted and things were revealed (I’m not saying I saw everything coming just that I was never properly surprised).

The author did manage to make the book fast paced most of the time which is saying something I guess. Also another thing I liked was the identity of Clair’s contact known as Q because I was really kept guessing with that. I felt this book had a lot of potential to be mind bending and thought-provoking as there were some good topics the author attempted to weave in with the plot. Sadly they stayed only as attempts.

I don’t know if I’ll read on or not, probably not although curiosity probably will get the better of me someday…. it always seems to 😛

I’d say those who like thrillers but don’t mind really unbelievable plots and boring unrealistic characters would enjoy this. But if you are looking for something that asks big questions, then I suggest you look elsewhere.