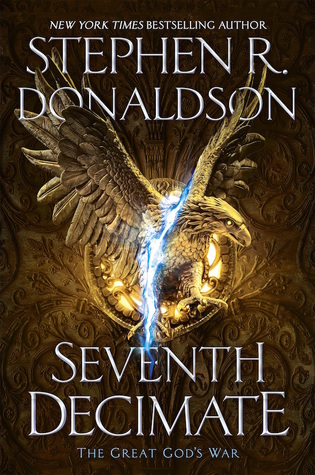 Fire. Wind. Pestilence. Earthquake. Drought. Lightning. These are the six Decimates, wielded by sorcerers for both good and evil.

But a seventh Decimate exists–the most devastating one of all…

For centuries, the realms of Belleger and Amika have been at war, with sorcerers from both sides brandishing the Decimates to rain blood and pain upon their enemy. But somehow, in some way, the Amikans have discovered and invoked a seventh Decimate, one that strips all lesser sorcery of its power. And now the Bellegerins stand defenseless.

Prince Bifalt, eldest son of the Bellegerin King, would like to see the world wiped free of sorcerers. But it is he who is charged with finding the repository of all of their knowledge, to find the book of the seventh Decimate–and reverse the fate of his land.

All hope rests with Bifalt. But the legendary library, which may or may not exist, lies beyond an unforgiving desert and treacherous mountains–and beyond the borders of his own experience. Wracked by hunger and fatigue, sacrificing loyal men along the way, Bifalt will discover that there is a game being played by those far more powerful than he could ever imagine. And that he is nothing but a pawn…

A lot of the time while I was reading this I laughed. Not because the book was funny but because everything about it was utterly unbelievable and poorly realised. The plot itself was literally all over the place because a lot of the time I didn’t know what the hell was going on and why we’d jumped from one topic to another without any warning. I mean seriously the characters were so two-dimensional and all of them seemed to have split personalities and while I totally appreciate the author trying to make his characters have complexity to them and make their intentions not always clear, it just seemed to fail here and make these characters seem like playground kids who have no depth to them.

That brings me onto the MC Prince Bifalt. Right from the start I hated him and if you’ve even read a page from his perspective you’ll understand why. He was just so arrogant and close minded, not to mention just plain stupid. He has this kind of character and attitude that makes you feel irritated, in fact I disliked him so much I was hoping more bad things would happen to him!

It just seemed like he never developed or grew as a character due to pure stubbornness and refusal to accept anything that wasn’t in his plan. I will also put it straight out here that the plot just did one big circle. In the end hardly anything had changed and the prince still had his own selfish, close minded plan in place even after everything he had been through.  Another thing I must say is there was more or less a complete lack of world building even after the MC stepped into the bigger world. I mean the characters were in a vast library of knowledge so come on, surely the author can put in some world history or at least answer some of our questions? No? Then you get a pointless novel that just takes you right back to the beginning.

In conclusion this was a pointless novel with unrealistic characters where there was potential to have a lot of originality. The writing itself was also mediocre holding hardly any excitement and a complete lack of suspense when it came to character building.

I guess if you’re brand new to fantasy or like unoriginal plots then you’d love this. Also you’ve got to not mind being faced with one of the most volatile, stupid MC’s in modern fantasy.