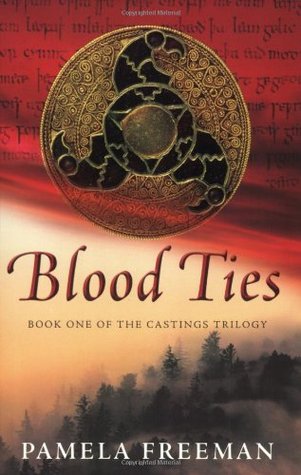 A thousand years ago, the Eleven Domains were invaded and the original inhabitants forced on the road as Travellers, belonging nowhere, welcomed by no-one.

Now the Domains are governed with an iron fist by the Warlords, but there are wilder elements to the landscape which cannot be controlled and which may prove their undoing. Some are spirits of place, of water and air and fire and earth. Some are greater than these. And some are human.

Bramble: a village girl, whom no-one living can tame … forced to flee from her home for a crime she did not commit.

Ash: apprentice to a safeguarder, forced to kill for an employer he cannot escape.

Saker: an enchanter, who will not rest until the land is returned to his people.

As their three stories unfold, along with the stories of those whose lives they touch, it becomes clear that they are bound together in ways that not even a stonecaster could foresee – bound by their past, their future, and their blood.

There were things I really liked and disliked about this book. On the things I liked were the way the story flowed, the world building and the way this books sets things up for later books.

The writing style I found quite strange and I can’t really explain why. It was like trying a new flavour of candy and not knowing whether you like that taste or not. On the back of my copy it said this was one of the most original and beautifully written fantasy epics of its time.. I don’t exactly beg to differ but at the same time I don’t entirely agree, yes the story was quite original and yes the author managed to fully paint a picture of her world and action scenes but I myself just found the writing a bit weird and hard to grasp (well at first anyway). Oh well it just takes some getting used to I guess.

Like I said before I found the world very well described and I loved all the description of the natural landscapes as those were really brought to life well and had a lovely peaceful feeling about them. The world history was delivered gradually and also it wasn’t exactly spoon fed to us either as there were some parts the author let us imagine ourselves.

This book was good and I will definitely finish the series but in next books I hope things will move a little faster and that I can emphasise more with the lead characters.

This book is definitely for those who are looking for something a little different in adult fantasy, meaning a different type of plot and method in which the story is delivered. However it also needs patience as things don’t fire up for a lot of the way and there is a lot of travelling. But it’s not a boring book, if you just bear with it, it will set things up nicely for the next book.